I welcome new information, just drop me an email at spero@soundworld.com.au

EARLY CAFE'S AND THEIR PROPRIETORS

The Highlights represent Hotels, Cafe, Special Interest, Clubs
Where can we start? ....
From memory and with the help of a few people, I have put together a story on the history of the Old Newcastle cafe scene.. As a descendant of the Old Newcastle Cafe Scene and having grown up in Newcastle East in particular Telford Street ... I think that we may as well kick off here......
<<<<<<< Starting at Telford and Hunter St's Corner and continuing west along Hunter St >>>>>>>
Starting at number 1 Hunter Street , Telford to Pacific St Block 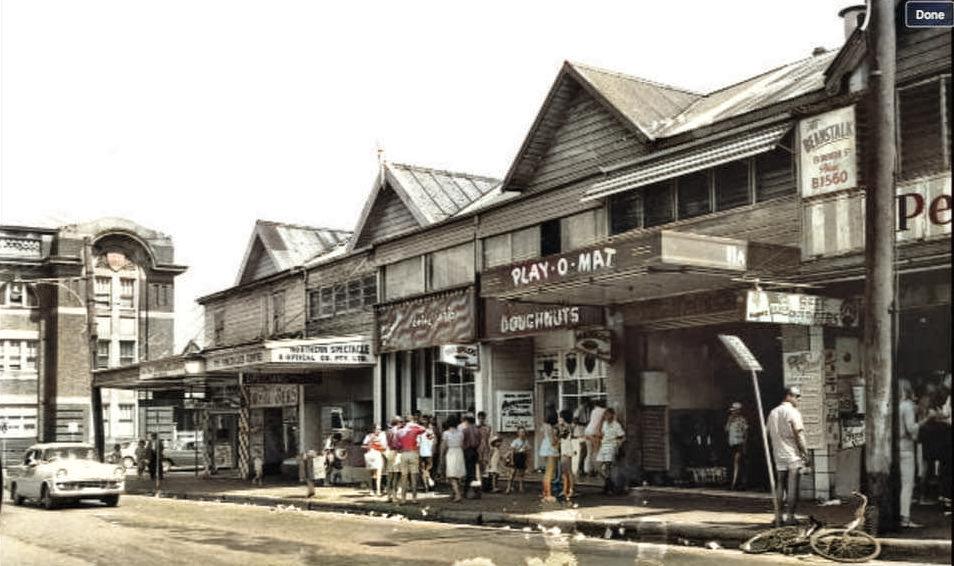 California Cafe (left) on the corner and others (now all demolished)

1 Corner Hunter & Telford Street's Newcastle Beach, East End
The California Cafe was Relocated to # 1 Hunter after closing down its operations at 147 Hunter St Newcastle (4 doors from Wolf St) in 1935 to make way for the opening  of the new Selfridge's Department store on July the 30th 1936. The proprietors of The California Cafe were Arthur Sikiotis and Paul (Polydoros) Paxinos. both originally from Stavros on the Island of Ithaca, Greece. Arthur Scott (Sikiotis) arrived as a 12 year old in 1914, on ship called the H.M.S.Mongolia. The Cafe was renowned for its hand made chocolates and pineapple juice The California used to also cater to the needs of the many dancers from Tyrrell House accros the road. Mrs Drinkwater was saying that when she worked there in the 1940's she was being paid 25 shillings per week, thats about $2.50 on todays money. It was also noted that the California had installed the FIRST JukeBox which catered for the Americans when in Port. 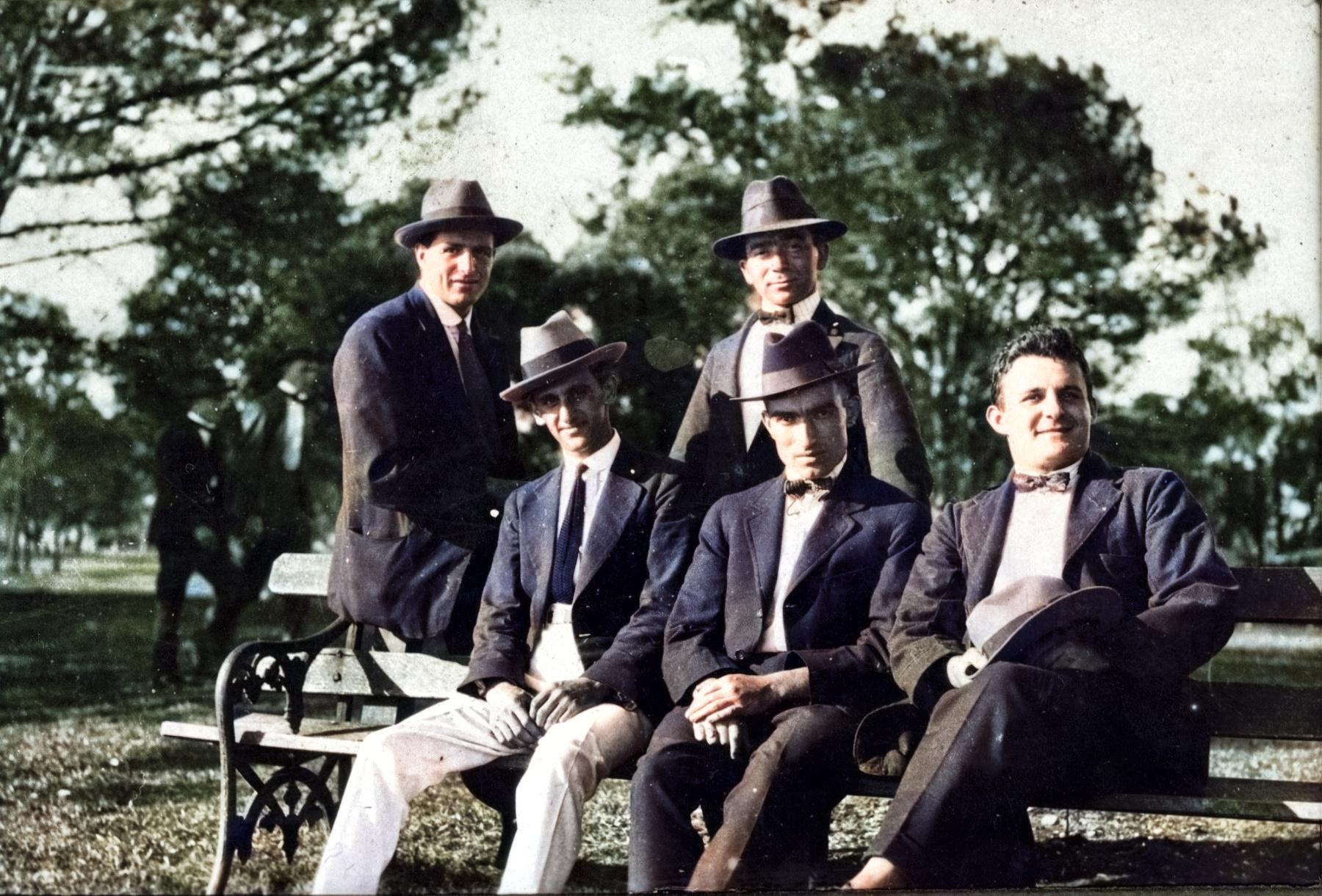 GREEK MAFIA IN NEWCASTLE 1928 They caused no harm to anyone, but they had to group together like
brothers and get organized to protect themselves and their hard-earned businesses up and down Hunter Street.
Most of them from the Greek Island of  Ithaca. The man on the right (not wearing his hat) is  Arthur Sikiotis, Cafe Proprietor.
Next to him, 'John the Handler' and 'Skinny the Driver'. Standing, 'Shorty the Arranger' and last is uncle Nick 'the Brain' Sikiotis. 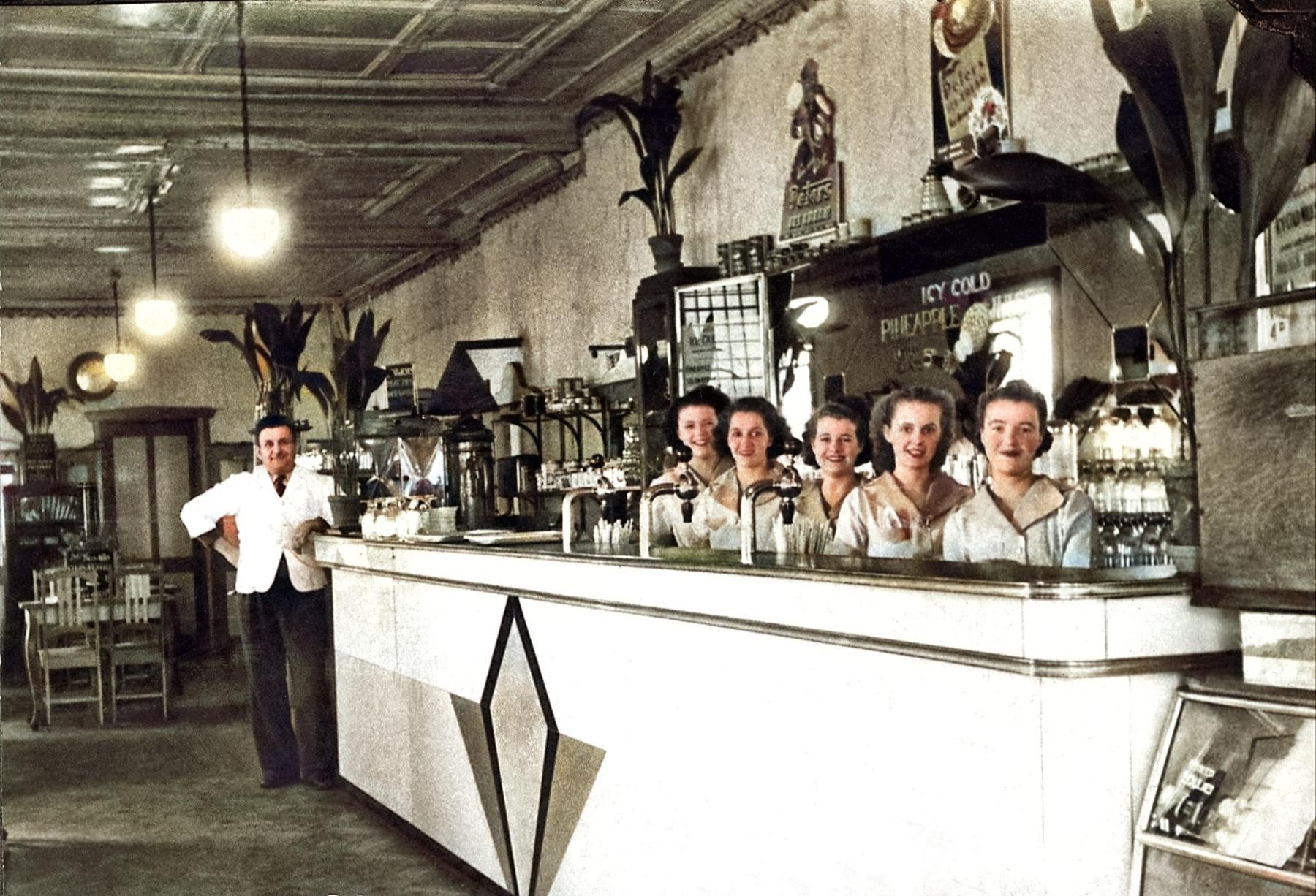 The California Cafe around the 1940-50's (Photo Sikiotis) 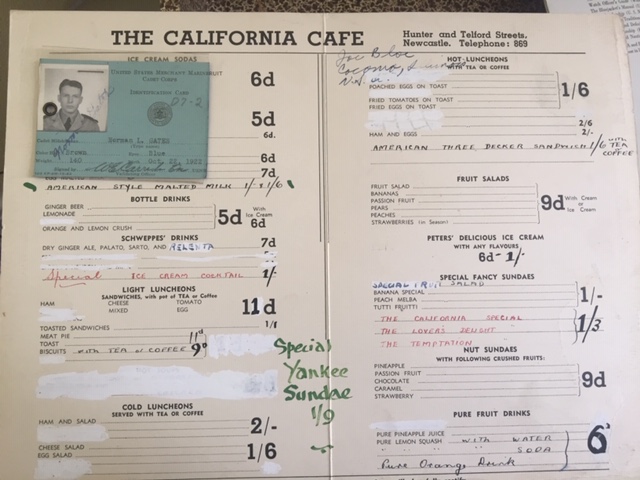 From our contributor, Barry A. Gates, USA,  I am following my fathers WW2 path while serving in the US Merchant Marine service. Amongst some items I found a copy of this menu, he must have dined in Newcastle during port call in June 1945 ! Norman Gates, passed away in 1963. That journey would have included a stop in Suva, Fiji as well as multiple east coast Australian ports. I am sure he probably enjoyed the ‘Yankee Sundae’. 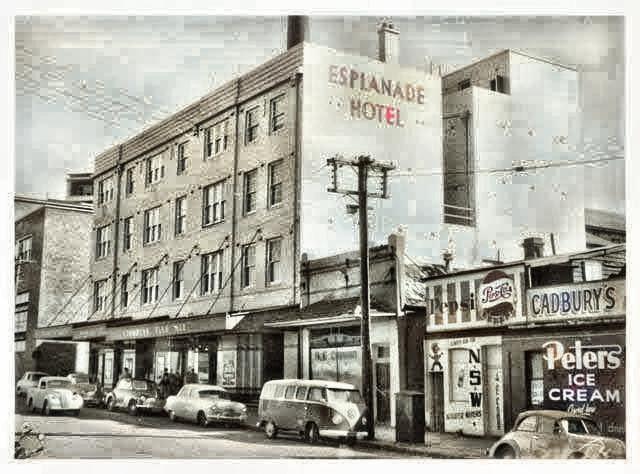 The Telford St side of the California Cafe, The Esplanade Hotel on Newcastle Beach,
The Butcher Shop with sawdust all over the floor, around 1955 (Photo UNI)

2 Corner Hunter & Telford Sts Newcastle, East End,  Built as The Wombah Flats in 1920
The Vienna Cafe .. I recall the owner, Demetrios had bought one of the first black & white television sets in the neighborhood. He had it placed in the back room of the Cafe. As I was living just a few doors down the street in Hellenic Court, he invited me in to watch TV anytime....  The TV intrigued me so much but not as much as the TV antenna installation...  I was stunned at watching the TV Antenna installers putting up a 50 foot mast up on the roof of the building.... Then for weeks i would sit outside the cafe and stare at this 'Antenna on the roof' and thinking " how does all this work ?"  What goes down those two wires?, What makes this thing tick !!, How do those things appear on the screen through a couple of of bits of wire.... For those that know me, "The rest is History"...
4 Hunter St Newcastle 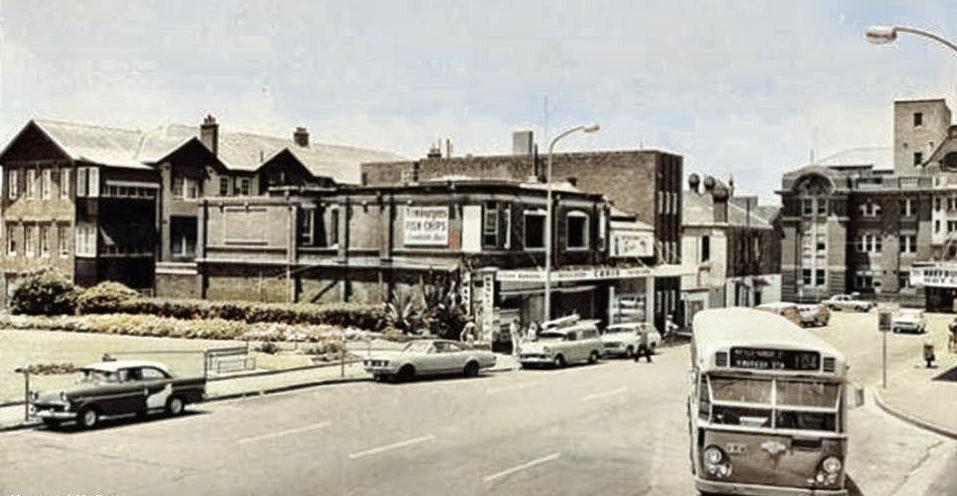 The Pacific Cafe with Shipmates next door, Hunter St, Top of Town, with my residance on the far left

Note - Back in the 60's and 70's, This particular block of shops in Hunter St between Telford and Pacific Street, (now demolished)
was the most popular part of Town,  A late Saturday night Hamburger was just the thing after a big night out !!
<<<<<<< Crossing over Pacific St and continuing west along Hunter Street >>>>>>
Pacific to Watt St Block 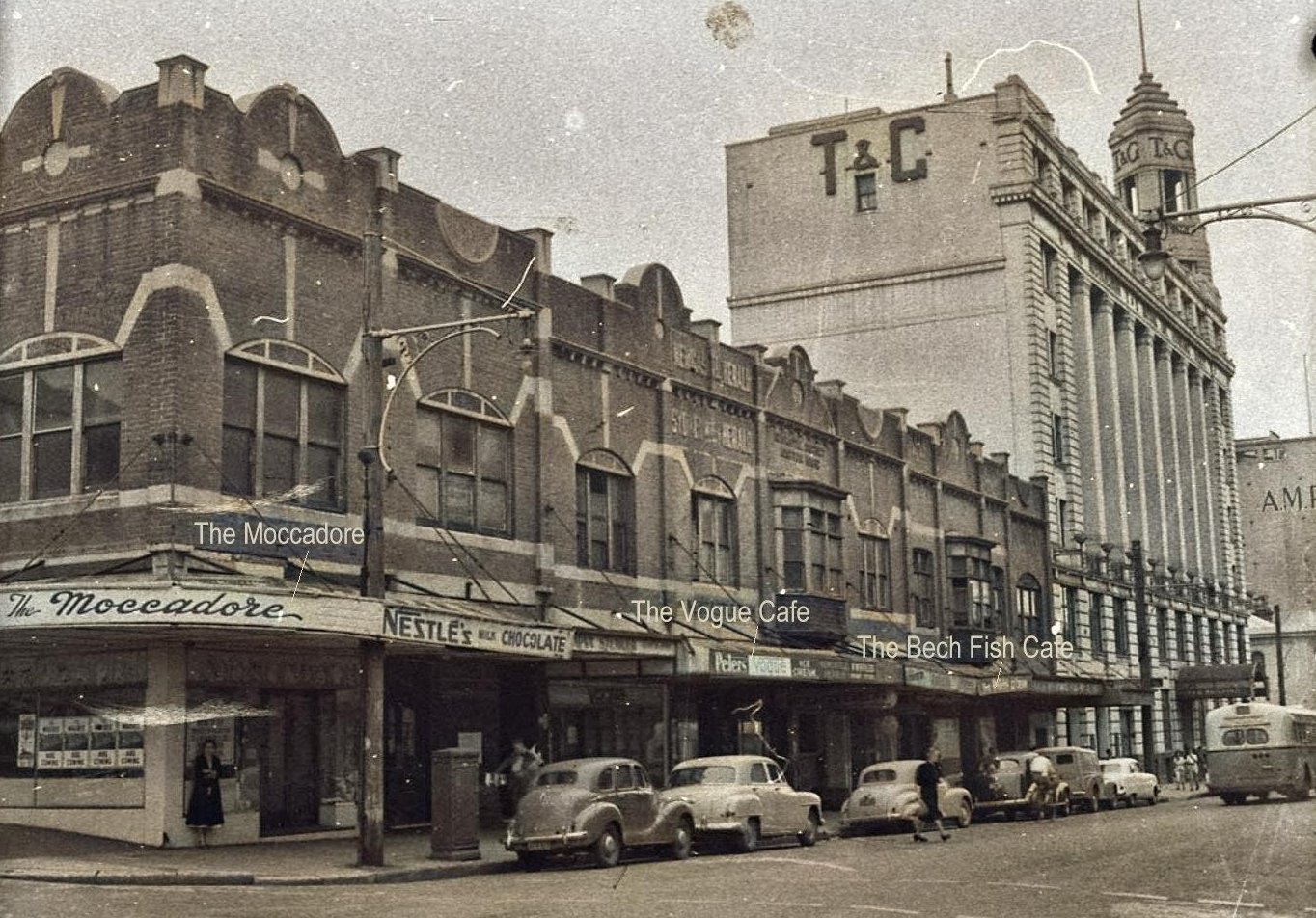 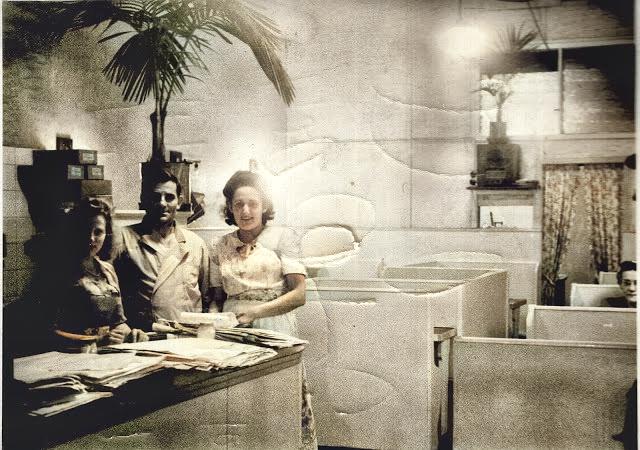 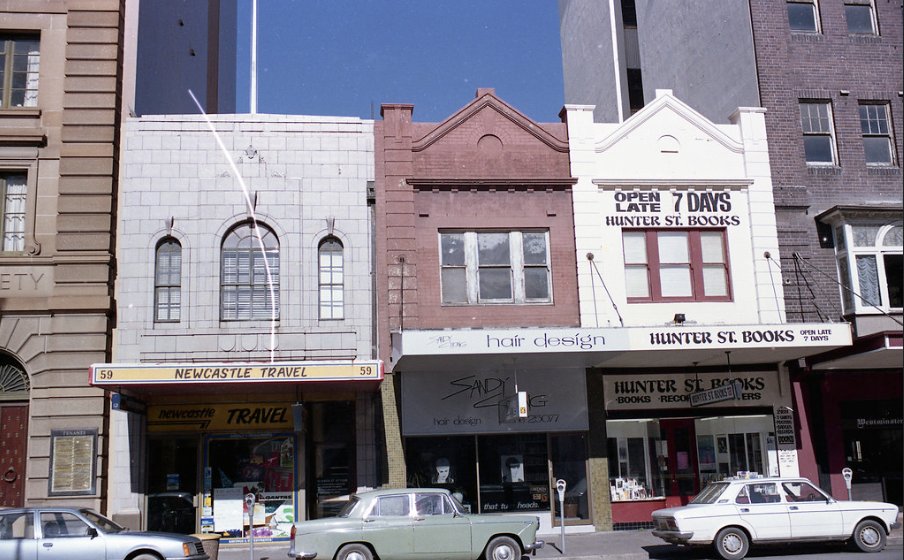 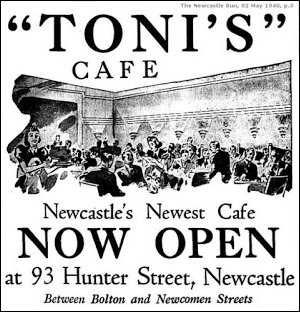 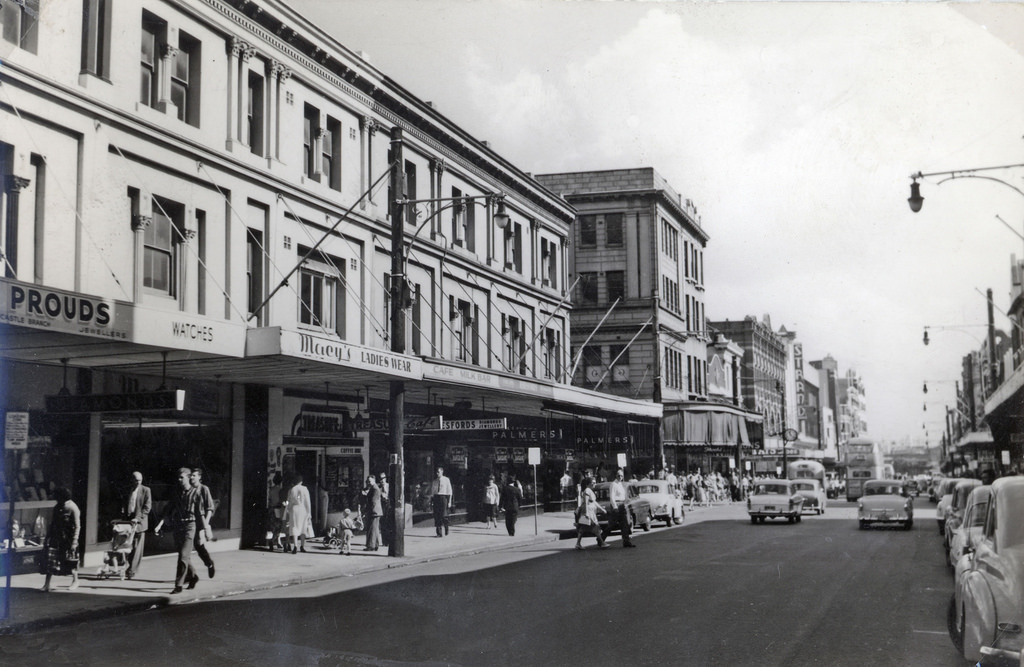 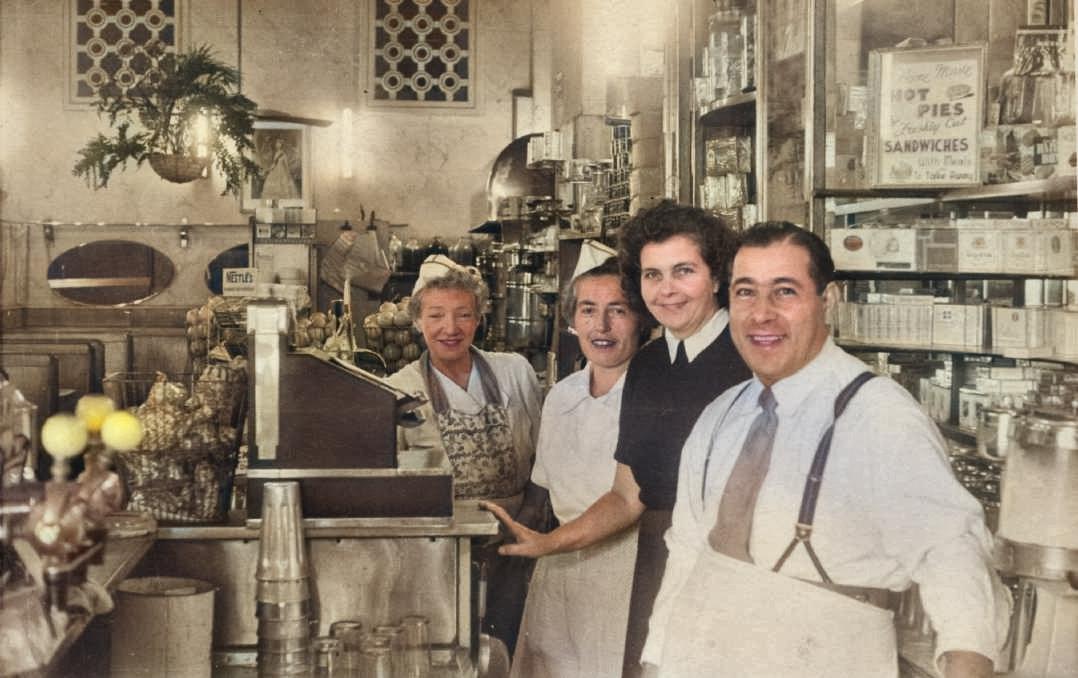 The Astoria Cafe with Jerry Kolivas 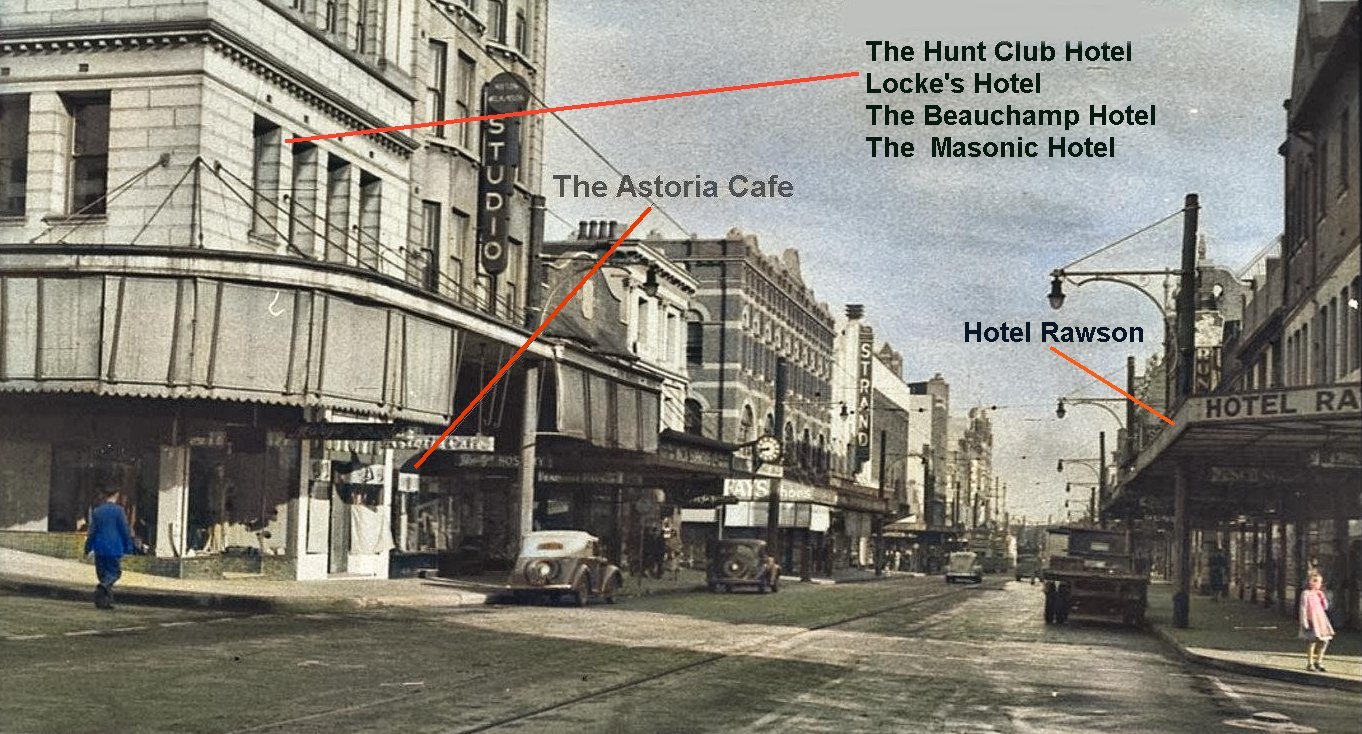 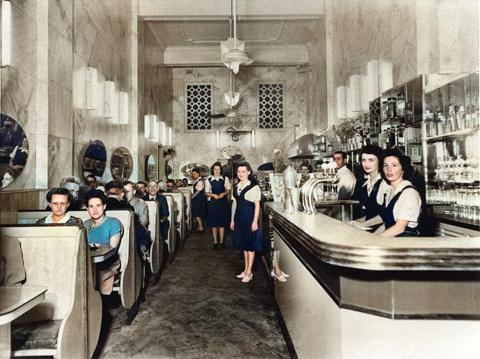 
<< Crossing over Wheeler Place and continuing west along Hunter, Blane Street >>
South side of Hunter St, Wheeler Place to Auckland St Block   Back to the top of page

Minerva Café  In the Photo above, Left to Right: Peter Skliros, unidentified shop assistant, James Zervos and Mick Prosssalentis, James Zervos
(Joakim Zaverdinos/Zoverdinos), converted a pre-existing fruit shop business into the Minerva café. He had arrived in Australia from Ithaca in 1937. In 1947, after undertaking military service, James married Angelica Raftopoulos at St Johns Anglican Church in Newcastle. The Minerva Café prospered, but there were occasional issues. In early 1951 for example, James was fined for 'smoking behind the counter' and in mid-1954, thieves forced a rear door to enter the premises and stole Ł250 worth of cigarettes, tobacco and currency. By the late 1950s, George Davias and another Greek were taken on as partners in the business. The café then underwent refurbishment of its interior to 'update' its décor and cooking facilities. During the second half of the1960s the Newcastle Workers Club acquired the premises for development.
Newcastle's Greek-run food-catering establishments of the early twentieth century were dominated by Arcadians and Ithacans  in contrast to the rest of New South Wales which featured a pronounced Kytherian presence.
Photo courtesy J. Zervos, from the "In Their Own Image: Greek-Australians" National Project Archives, Macquarie University, Sydney
Currently -  Demolished site ready for the building of the new Sky Apartment Tower

<<< Crossing over Steel St and continuing west along Hunter Street >>>

spero@soundworld.com.au
SHORTLIST OF CAFE'S, THEIR PROPRIETORS and ARRIVAL DATE

NEWS OF THE DAY
News from way back... found whilst researching By Spero Davias - 2012 - 2019
spero@soundworld.com.au 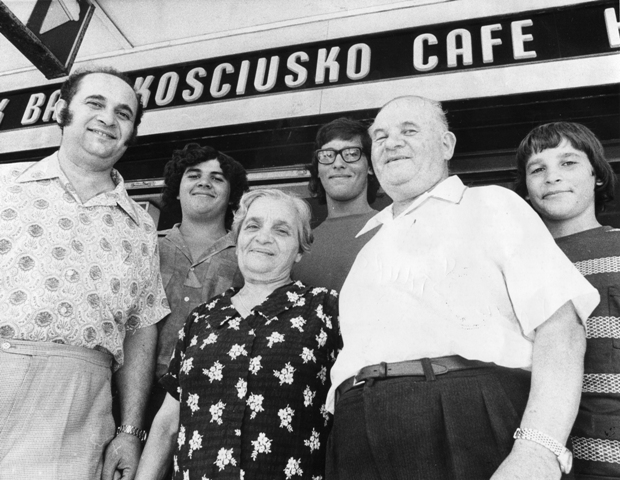 SHORTLIST OF CAFE PROPRIETORS, THEIR ORIGIN and ARRIVAL DATE.

Thanks go to all our contributors to date.....
Spero Davias,  Angelo Coots, Greg Lucas (Chegs), Noula Trypas, Angelo Tsiaousis, Thora Constantinou.
and also to Catherine (Nina) Raftos for her fantastic contribution.
A Special thanks for her contributions must go to local historian, Pamela Marley

Spelling Mistakes
The Newspaper Jurno's at the time were not the best spellers of Greek Names.
Most names are shown as printed in the newspaper clippings, some are updated.

If you are looking for my other blog Project,
The History of Hunter Street... It's Here.
Back to the top of page